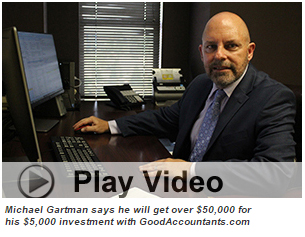 Certified Public Accountant, Michael Gartman, says he and his partners, Pat Finn and Bill Hart, have never encountered anything like GoodAccountants.com in their combined 100 years of experience as accountants. “ Our first client from GoodAccountants.com will end up netting us about $50,000 to $54,000 over a three year period which is a great return for us after only investing $5,000 with GoodAccountants.com,” says Gartman.

Gartman was first contacted by GoodAccountants about a private school that was leaving a five-year relationship with their prior auditors. “Al Chisolm of GoodAccountants.com called me up and asked if I would be interested in taking on an audit engagement with one of his clients which was a sixty-year old, private school with 120 students ranging from pre-K to eighth grade,” says Gartman. The highly prestigious school whose budget ranges between $1 million and $1.2 million was seeking audited financials along with their 990 and 401K Form-5500 tax filings.

Officially joining GoodAccountants.com on March 2nd at a cost of $5,000 dollars, Gartman met with the school’s Director of Finance on March 9th and one month later was awarded a three-year, $18,000 per year, audit engagement on April 9th.  As a result of taking action on the phone call he received from GoodAccountants.com, Gartman has leveraged a $5,000 investment into more than $50,000 in revenue for his accounting practice.

GoodAccountants.com is the nation’s fastest growing online accounting service and is also the U.S. accounting industry’s largest advertising aggregator. The company advertises on behalf of hundreds of accounting firms which comprise its nationwide network of accounting professionals. Small to mid-size companies responding to GoodAccountants’ massive online advertising campaigns are then matched with local, member accountants. “We’ve made thousands of matches of business owners with accountants over the past 10 years and we’re now attracting some of the largest companies in America that are contacting us to take advantage of our free referral services,” says Johanna Laurent, President of GoodAccountants.com. “We’re no longer relegated to just serving small to mid-size companies or individual tax payers,” adds Laurent. Among some of the large corporations that have contacted her company in search for accountants to perform tax and audit work are the National Basketball Association (NBA), The Memorial Sloan Kettering Cancer Center, Arco Oil Company, The Georgia World Congress Center and Dunkin Donuts.

The most important element that some accountants are missing when considering GoodAccountants’ unique marketing platform is its residual income component which keeps paying dividends to participating accountants year after year. Industry statistics show that accountants on average retain their clients for a period of seven years. An accountant who pays $5,000 to retain a client that pays him $18,000 in recurring, yearly billings is not only more than tripling his investment in the first year but is also grossing $126,000 over a seven year period which is a substantial return on a $5,000 investment. According to Gartman, although the initial audit engagement is for three years, with proper servicing, his firm will keep  their new client indefinitely which could ultimately return as much as $150,000 or more on a $5,000 investment.

Thomas Crayton, a Certified Public Accountant based in Stafford Texas says he has already collected $248,000 in billings from clients that were referred to him by GoodAccountants.com over a three and a half-year period. Crayton continues to collect approximately $120,000 each year, ongoing, from these same clients without having to pay GoodAccountants.com any additional marketing fees other than the $110,000 he has already paid them over the same three and a half-year period.

“Paying a relatively small, one-time, upfront fee for something that continues to pay you year after year after year should make a lot of sense, particularly to someone looking to build an accounting practice,” says Laurent. “Add in the fact that every dollar spent in marketing fees with GoodAccountants.com is guaranteed dollar for dollar, eliminating any risk of loss on the accountant’s investment, is what makes our business model truly unique,” adds Laurent. “Where else can you get this kind of return on investment especially investing in your own business,” quips Laurent.  “GoodAccountants.com is the only marketing outfit that not only guarantees your investment dollar-for-dollar, but for us they delivered a $54,000 client on our initial $5,000 investment within our first thirty-days of joining their network,” says Michael Gartman.

Be the first to comment on "Michael Gartman, CPA Reviews GoodAccountants.com"