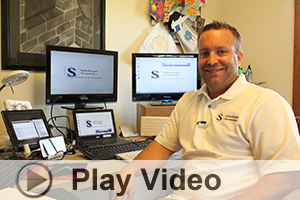 Dwayne Sollenberger like most accountants had never done any kind of marketing to attract clients to his accounting practice. He built a website and networked with his local Chamber of Commerce but beyond that, Sollenberger had not really given much thought to using an independent marketing firm to help grow his practice. On March 12th 2012, he received a telephone call from GoodAccountants.com which he unfortunately brushed off as a telemarketer trying to sell him something. Then fifteen months ago he received another call from GoodAccountants concerning a $4.5 million manufacturing company that was local to him and was looking for a new accountant. “It sounded too good to be true,” says Sollenberger. Nonetheless, Sollenberger made the decision to join GoodAccountants.com at a cost of $5,000 and has since added twelve new business clients to his accounting practice for combined first-year-billings exceeding $27,000.

According to Sollenberger, he would never have found these clients on his own especially with his practice being situated in such small towns as Waynesboro, and Lancaster, Pennsylvania, which are far from being bustling metropolises. Lancaster has a population of 60,000 and Waynesboro only 11,000 yet Sollenberger has just about managed to sign one new company per month from among the companies in his locale that have been referred to him by GoodAccountants.com.

What’s most remarkable is even in rural areas like Waynesboro, business owners are still quite comfortable turning to the Internet to find their accountant. More than 30 million Internet key-word searches are generated each year that incorporate the word “accountant” and is indicative of the fact that business owners and individual tax payers now search for their accountant online instead of asking their attorney or banker for a referral to one.

Be the first to comment on "Dwayne Sollenberger, CPA Reviews GoodAccountants.com"