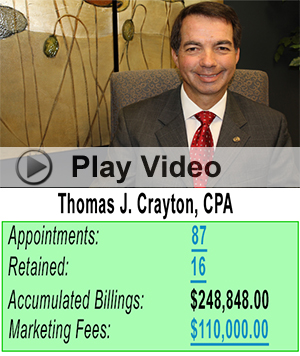 Thomas Crayton, a Certified Public Accountant based in Stafford, Texas, has collected more than $248,000 over a three and a half year period from clients he has obtained from GoodAccountants.com since September 7, 2011.

Crayton says he owes a debt of gratitude to another accountant based in Oklahoma City who is a member of GoodAccountants.com whom he called up for a reference about the company when he was first approached by Stephen Mack back in 2011 concerning a prospective audit client. “Had she not told me about her own success with GoodAccountants.com, I probably would not have joined,” says Crayton. “I’m so glad I did,” he adds.