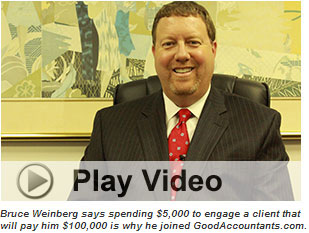 Bruce H Weinberg of Weinberg & Company, P.A., Certified Pubic Accountants, has engaged $20,000 in annualized billings from two marketing programs purchased just one week apart from GoodAccountants.com, at a cost of $5,000 each. Although most observers would agree that a one-hundred percent return on investment achieved in less than a year is quite impressive, the real success story here, according to Weinberg, has more to do with the $100,000 in residual income he will earn from the new clients that have been delivered to him by GoodAccountants.com.

“I initially joined GoodAccountants on July 10th 2012 with a $5,000 investment and within just a couple of days I had my first client which resulted in annualized billings of approximately $7,000 and I still retain that client,” says Weinberg. “I was so impressed that within a week I invested another $5,000 with GoodAccountants and that $5,000 also resulted in close to $10,000 worth of billings,” adds Weinberg who has just forked over another $25,000 to GoodAccountants.com for their Designated Service Provider (DSP) marketing program which guarantees him $50,000 in annualized billings.

Through GoodAccountants.com’s efforts, the very first client I got was actually a boat sales and repair company that had approximately a dozen employees and I was even able to retain approximately four individual tax returns out of that client,” says Weinberg. “The largest client I’ve garnered so far through GoodAccountants.com is an online back-up to the cloud service firm that backs up important data for private companies and their annualized billings are probably going to be close to $8,000 to $10,000 a year,” he adds. But what Weinberg stresses about this client is he believes over the next four to five years he will earn somewhere between $40,000 and $50,000 or possibly as much as $100,000 over the next ten years. It is this kind of residual income according to Weinberg that explodes the actual return on investment that an accounting firm can realize through GoodAccountants.com’s marketing platform.

According to Weinberg, spending $5,000 with the potential of getting back $100,000 over a ten year period is the correct way in which accountants should look at an investment with GoodAccountants.com and not simply for initially being able to double or triple their investment within a few months no matter how sensational that might be.

Be the first to comment on "Accountant Bruce Weinberg Reviews GoodAccountants.com"