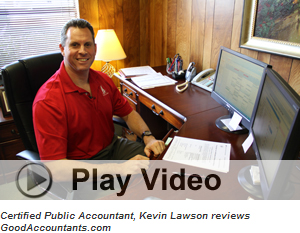 Certified Public Accountant, Kevin Lawson believes some accountants may be missing out on the true benefits that come from hiring a marketing firm to grow their accounting practice. According to Lawson, the real benefit to his accounting practice is the long-term, residual income that is generated from the clients that have been referred to him by GoodAccountants.com, the nation’s fastest growing online accounting service. “After engaging with GoodAccountants.com about a year and a half ago we can probably grow our practice by an additional $100,000 in annualized revenues each year as we go forward,” says Lawson.

The Rowlett, Texas based accountant says the very first client he picked up from GoodAccountants.com is a local trucking company that has grown from a half-dozen trucks to a fleet of more than sixty in just the year and a half since he’s engaged them.  He estimates over the next ten years he will generate revenues in excess of $87,000 from just this one client. Some industry experts see this as a significant occurrence since traditionally accountants have largely ignored internet marketing as a way to grow their business. “With the prevalence of online search, accountants have now discovered a far more cost effective way to grow their practice,” says Johanna Laurent, President of GoodAccountants.com.  “With the proliferation of smart phones and tablet computers consumers now search the Internet for everything from vacation packages to accounting services which has become a huge game changer for accountants,” explains Laurent. “If you can spend a total of $5,000 in year one that will generate earnings of $100,000 over the next ten years for your accounting practice, that’s far more cost effective for an accountant than buying an existing practice,” adds Laurent.

Purchasing clients from another practitioner is one way to grow your accounting practice however the downside to buying an existing practice is the cost can often exceed the billings the practice generates yearly. With advertising, the upfront investment for the accountant can be considerably less while in some instances generating an immediate profit in the same year the clients are acquired.  The other benefit of acquiring clients through advertising with GoodAccountants.com according to Lawson is the screening process which allows him to learn about a prospective client before meeting with them.  “By the time I go see a client I know exactly what they need, I know exactly what their hot points are, I know exactly what they’re looking for in an accountant and the services that they need,” says Lawson, referring to the leads he’s received from GoodAccountants.com.

Be the first to comment on "Certified Public Accountant, Kevin Lawson Reviews GoodAccountants.com"