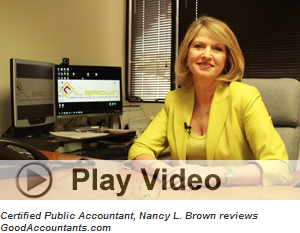 Nancy L. Brown, a Certified Public Accountant based in Miami, Florida is committed to adding an additional $50,000 to $75,000 in recurring, annual billings to her accounting practice this year. Brown, like most sole practitioners, believes adding this amount of new billings each year to her practice is critical to a retirement strategy. Seeing signs the economy is finally turning around with many small business owners beginning to emerge from their financial bunkers and starting to retool their business, the question for Brown was which path she would take to find the additional billing.

Luckily for Brown, a telephone call from Ryan Holahan, a consultant with GoodAccountants.com, regarding a freight auditing company that was looking for a new accounting relationship, would prove to be the first step along a path that has led her to the very thing she was looking for; a way to increase her billings.The freight auditing company, which has become Brown’s client, now pays her approximately $8,000 in recurring, annual billings each year.

“I had never heard of GoodAccountants.com before that phone call,” says Brown who has since invested close to $20,000 in advertising with GoodAccountants.com. But according to Brown, the investment has been well worth it. “The last client that I retained through GoodAccountants.com is a law firm,” says Brown. “If I retain the law group for the next five years I would estimate my fees will be somewhere between $150,000 and $200,000 for the period, and if I retain them for ten years it’s going to be double that,” explains Brown. “The residual income that I receive from the clients that GoodAccountants.com refers to me goes right to my bottom line and helps me grow my practice and that’s a great motivator especially for someone who wants to expand their practice,” she explains.

When asked why she did not opt to purchase an existing practice with the almost $20,000 she has spent to advertise with GoodAccountants.com, Brown’s response was it would take much more money to buy an existing practice than what she has spent. She also says purchasing a practice is far more complicated than the path she has chosen with GoodAccountants.com. “I don’t do the advertising myself because I have a CPA practice to run and I don’t have time to determine what’s effective or how to write a good ad or where to advertise or when to advertise, instead I leave that to GoodAccountants.com,” explains Brown. “Could I produce and run a TV commercial for $5,000, no way,” proclaims Brown.

The real value it seems that GoodAccountants.com provides accounting practitioners is its substantial marketing prowess and presence in the marketplace that no single accountant or accounting firm could accomplish on their own. The company spends millions of dollars in advertising and their ads can be seen all over the Internet. So when a small town accountant joins their network he or she automatically becomes a part of the GoodAccountants.com brand name and the beneficiary of a much bigger presence in the marketplace, which would be unattainable as an individual advertiser. “When people criticize the cost to participate with GoodAccountants.com I would tell them they need to keep in mind that they’re getting a guarantee for every dollar they spend, you can’t get that anywhere else,” she adds.