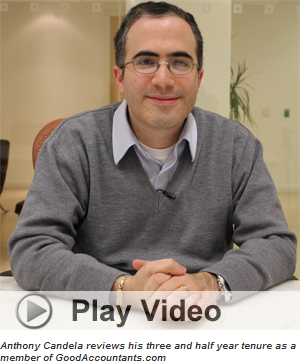 Anthony Candela is a Certified Public Accountant who operates a small accounting practice along with his wife in Midtown Manhattan. It was a little over three years ago when Candela first saw a television commercial that would cause him to make an important decision about how he would grow his accounting practice. What caught his attention about the TV ad was the fact that it was not directed toward him but instead toward business owners who were unhappy with their accountant and were looking to make a change. It was also the very first time Candela would hear of GoodAccountants.com, the company behind the television commercial.

After viewing the commercial, Candela immediately began researching the company and then decided to contact them to see how they could help him build his accounting practice. After speaking to a representative, Candela quickly decided to become a member of GoodAccountants.com’s nationwide network of accountants who service the business owners and individual taxpayers that respond to the company’s advertisements. Candela has since garnered in excess of sixty thousand dollars per year from recurring billings from clients that have been referred to him by GoodAccountants.com, the fastest growing online accounting service in the country.

The latest client Candela says he has retained from GoodAccountants.com is a restaurant in midtown Manhattan that does $2.5 million in revenue with fifteen employees. Candela says he receives $1,500 per month or $18,000 annually from just this one client. “If you think about it, keeping this client for ten years equals revenues of one hundred and eighty thousand dollars,” says Candela. “After the initial investment, that residual income is dropping down to my bottom line with no further amounts going to GoodAccountants.com,” adds Candela.

What is lost on some who attempt to analyze the pros and cons of purchasing a membership with GoodAccountants.com is the ongoing residual income that is generated for participating accountants from the clients that are referred to them. “We’re ecstatic about obviously increasing our revenue, but once again this is an investment that you make, and now we’re ecstatic that we were able to make that money back and it has been a fruitful investment and basically paid itself off and continues to pay itself off as clients stay with you year after year,” explains Candela.