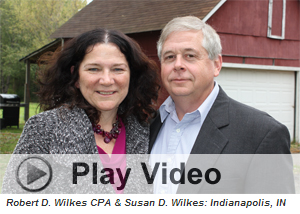 When Robert and Susan Wilkes were unsuccessful in their attempt to purchase a local accounting practice which would have provided them the additional income they needed, they decided to turn to the Internet to find a marketing company that could help them grow their own accounting practice instead. “On January 9th of this year we put in an offer to buy a local accounting firm but luckily we were turned down because it would have put us into a tremendous amount of debt,” says Sue. “At first we were very disappointed about not getting that practice but about ten days later we went online and found GoodAccountants.com so here we are,” explains Sue referring to the forty-six thousand dollars in annualized billings that the couple has booked from just two of the companies that were referred to them by the nation’s largest accountancy referral service.

Rob who is a minister as well as a certified public accountant holds a B.S. in Accounting, a Master’s in Public Administration and a Master’s Degree in Divinity while Sue holds degrees in both education as well as accounting. Their extensive educational backgrounds combined with twenty plus years of accounting experience makes this husband and wife team uniquely qualified to help small business owners in a myriad of ways. Sue is also a QuickBooks Pro Advisor and spends a fair amount of her time unraveling the messy accounting records of many of her clients. When asked what made them move up from their initial $5,000 investment with GoodAccountants.com to one of the company’s larger marketing programs which cost them $50,000 the Wilkes responded that it was purely a monetary decision. “The last client we picked up from GoodAccountants.com is our largest client which is a $11 million dollar printing company that pays us $30,000 annually,” proclaims Sue. “We would have never found these clients on our own,” adds Rob. “For every dollar we spend with GoodAccountants.com they give us back two dollars in billing,” he explains.

Given this kind of return on investment it’s easy to understand why the Wilkes are so excited about their affiliation with GoodAccountants.com. As more and more accountants across the country are becoming aware of the advantages of marketing their services as opposed to relying on ‘word of mouth’ many are convinced that purchasing a membership with GoodAccountants.com is the best way to spend their marketing dollars. “With GoodAccountants.com you pay a fee and they guarantee double that fee in billing so within a year’s time we will have doubled what we’ve paid them,” explains Sue. “We see it working otherwise we would not have done it,” she adds. “Traditionally, spending marketing dollars means you’re just shooting in the wind whereas with direct mail they say the most you’re supposed to get back is a one or two percent return yet you’re spending all this money but none of this compares to what you get back with GoodAccountants.com,” she further explains.

No one would argue that a two dollar return for every one dollar you invest in marketing or in anything else for that matter is an unbelievably good deal however when comparing the cost of purchasing clients from another accountant or purchasing an existing accounting practice the numbers make even more sense in favor of investing with GoodAccountants.com. Historically, accountants like other professionals expect to pay one dollar or even a dollar and a half for every one dollar worth of billings they purchase from another accountant who may be retiring from the practice.   However when attrition is factored in, which is the churn rate that accountants generally experience from lost clients who migrate away from newly purchased practices, then the GoodAccountants.com model looks even better. Why pay an effective rate, which in reality could be as high as three to four dollars for every one dollar in billings purchased once the client attrition rate is factored in, when you can pay fifty-cents for every one dollar in billing?  Profitability is realized almost immediately with GoodAccountants.com’s model which also allow accountants the ability to scale the number of clients they acquire over a given period of time and also eliminate the burden of long term debt which comes with buying an existing practice.

GoodAccountants.com is the fastest growing online accounting service in the country offering accountants access to both corporate and individual taxpayer clients that are actively searching for the right accountant for their business or personal accounting needs. The company has developed a proprietary, patent-pending software that offers users a two to one guaranteed return on their advertising dollars. For more information about purchasing a membership with GoodAccountants.com please click here.