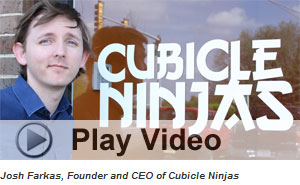 Josh Farkas is the thirty-year old founder and Chief Executive Officer of Cubicle Ninjas Inc., one of the fastest growing and most sought after web development and design companies to emerge from the digital media landscape in recent years. Farkas, in little more than three years, has assembled a highly talented, tech-savvy team of young professionals whose design work along with their grasp of digital media and social networking has resulted in more than two-hundred awards and citations from leading Internet galleries and digital media associations, a feat that is unparalleled in the industry.

But how could someone who can so easily be mistaken for a teenage video gamester who would prefer spending every waking hour surfing the Internet in their grandmother’s basement, have so quickly assembled such an impressive client list of multinational corporations such as General Electric, American Express, IBM, ADP, Citibank and Federal Express? Perhaps the answer can be found in two things that all small business owners can benefit from; having an understanding of digital media as well as the social networking phenomenon that is driving the current Internet boom. Farkas, who is widely regarded as one of the rising stars in digital media, recently contacted GoodAccountants.com, the nation’s largest accountancy referral service, to find the right accountants that could oversee his company’s rapid growth.

Understanding the importance of finding a local accounting organization that could fulfill the needs of a fast growing digital media company, GoodAccountants.com referred James A. Sherman, CPA of James A. Sherman & Associates Inc., to Cubicle Ninjas. According to Johanna Laurent, President of GoodAccountants.com, Sherman who runs a boutique accounting firm based in Naperville, Illinois is the perfect outsourced CFO candidate for small business owners because he allows them to focus on what they do best and leave their accounting process to him. “Why employ someone at three times the cost of using the services of an outside, independent, Chief Financial Officer or Comptroller whom you do not have to put on your books,” quips Laurent. “Why pay someone for eight to ten hours of work each day for five days per week along with benefits, sick days and paid vacations when someone like Jim Sherman can do the work in half the time for a third of the cost,” she asks. “You will never pay our guys for sick days or paid vacations or for the hours they’re sitting idle reading a newspaper or chatting with a friend during working hours,” explains Laurent. “I have saved companies hundreds of thousands of dollars annually by helping them outsource their accounting and bookkeeping rather than hiring someone internally to do the work,” says Laurent.

Outsourcing has become one of the fastest growing trends today among large and small companies looking to substantially reduce their accounting costs as opposed to employing a Chief Financial Officer or bookkeeper which can be quite expensive. “If they’re going to increase their income, that’s where they need to focus, that’s what they’re good at doing, that’s what they enjoy, and through outsourcing they can do that while leaving their accounting decisions to an expert like me and its not going to cost them an arm and a leg,” says Sherman.

“You don’t know what you don’t know,” says Farkas referring to his need to find the right accounting professional who could serve as his company’s outsourced Chief Financial Officer which led him to contact GoodAccountants.com. “We were really in a perfect situation, we had amazing clients, we had a team of creative people, but we didn’t know what the heck we were doing from an accounting perspective,” says Farkas. “Being a small business owner I never trusted anybody with our books so in the past even though we were growing like crazy I was the person sitting down late at night doing taxes, running invoices, doing billing, which was the reason we made this change because we needed to find someone who could focus on this and do it very well,” he adds. “The GoodAccountants.com process was just seamless on our end, we submitted our request online and within a few minutes we received a call from Johanna and she was helping us to try to understand our situation and to see if the financial advisers they had in their network that would be the best fit for us,” says Farkas.

For more information about how to become a member of GoodAccountants.com click here.

Be the first to comment on "GoodAccountants.com Complaints? Business Owner And Accountant Tells All"