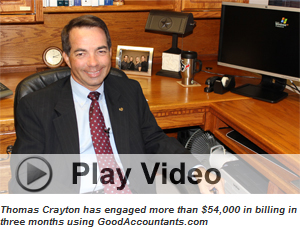 According to Thomas J. Crayton, a certified public accountant based in Sugar Land, Texas, nothing has brought more money faster to his accounting practice than has his membership with GoodAccountants.com. GoodAccountants.com is an online accountancy referral service that helps large and small companies find accounting professionals free of charge. For Crayton, it has become the vehicle that has produced more than $54,000 in billing in three months from three separate companies.

Crayton says Goodccountants.com has generated more revenues faster for his accounting firm than anything else in his 31 years of practice as an accountant. Having upgraded to GoodAccountant.com’s twenty-five thousand dollars Designated Service Provider (DSP) marketing program which guarantees him seventy-five thousand dollars in new billing, Crayton says buying a practice has been far less financially rewarding than his return on investment with GoodAccountants.com.

The problem with buying an accounting practice according to Crayton is it can cost more than one-hundred percent of your collectible billing and you can lose as much as sixty-percent of the clients. With GoodAccountants.com you’re starting off with a two-thirds discount on the cost; whereas you’re getting seventy-five thousand dollars in guaranteed billing for twenty-five thousand dollars. “Since these are new clients that are first starting out with you compared to someone else’s old problematic clients, GoodAccountants.com is a far better way to go,” says Crayton.

When first contacted by GoodAccountant’s Senior Consultant, Stephen Mack, about the opportunity to meet with the managers of a $5 million Belgium subsidiary company looking to retain new auditors for their annual audit, Crayton initially expressed skepticism. The meeting would result in Crayton engaging his first client from GoodAccountant.com paying him more than $17,000 in annualized billing.  “The engagement in reality is a multi-year contract that will ultimately pay more than $67,000 to Crayton’s firm,” says Johanna Laurent, President of GoodAccountants.com. “The day after I paid the $5,000 I met the client and it was sweet,” says Crayton referring to the cost of a membership with GoodAcountants.com. “Spending $5,000 to land a client paying you $17,000 makes you ask yourself the question how can you beat that,” says Crayton.

Become a member of GoodAccountants.com by December 31, 2011 and automatically lock in $10,000 in guaranteed billing click here.