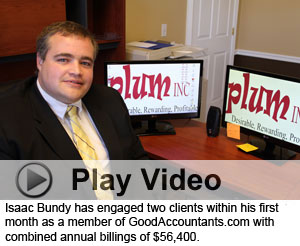 Isaac Bundy understands building a corporate image through brand development and is taking his impressive closing skills and grasp of marketing to new heights.  He’s doing it through Plum Inc., a boutique accounting practice nestled in the pristine suburb of West Jordan, Utah on the outskirts of Salt Lake City.   The acquisition of two new corporate clients from GoodAccountants.com with combined annual billings of $56,400 has landed Bundy among  the highest closing ratio of thousands of accountants across the country that comprise the GoodAccountants.com network.

A member of GoodAccountants.com since August 2011, Bundy says he is now able to grow his practice at a much faster pace using the unique advertising platform that is offered to accountants all over the country by GoodAccountants.com, the nation’s largest accountancy referral service.

Few can argue with the fact that Bundy is skillfully building one of the fastest growing accounting practices in Salt Lake County. “Isaac Bundy is not only a master closer and  promoter of his own brand, he also possesses a deep sensitivity to people,” says Johanna Laurent, President of GoodAccountants.com.  According to Laurent, Bundy brings the correct mindset to his meetings with prospective clients which fuel his propensity to close deals.   “He knows exactly what to say and do when he meets with the owners and managers of the various companies that we have introduced him to and he always walks out with the sale,” adds Laurent.  Unlike many accountants who fail to “listen” to the client’s needs, Bundy on the other hand becomes a sounding board through which business owners can share their daily challenges.  “We don’t bill them for every little thing they call us to ask a question about but instead prefer working on a flat rate basis with our clients,” says Bundy.   He also provides a quality service at the right price.

“In the past month he has closed two out of two great clients we have put him in front of with annualized billings of more than fifty-six thousand dollars,” says Al Chisolm, a senior business consultant with GoodAccountants.com.  “He is a problem solver and gives our clients a sense of direction as well as a feeling of comfort when he meets with them, which is evident from the feedback I’ve received from the business owners after they have met with him,” adds Chisolm.  “All of the advertising and marketing that one may do for an accountant can prove futile if the accountant cannot close the deal,” says Chisolm.  “This guy is a closer,” he quips.

Be the first to comment on "Isaac Bundy’s Plum Accounting Holds 100% Closing Ratio With GoodAccountants.com"