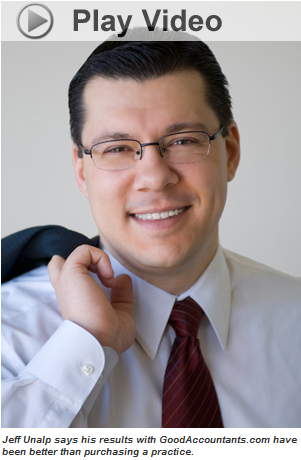 Jeff R. Unalp and Guy E. Black are the principals of UMBCPA LLC, a boutique accounting practice based in Walnut Creek, California. A member of GoodAccountants.com since April 2011, the firm’s first referral from GoodAccountants to meet with a local San Francisco Bay area entrepreneur, who owns nine gas stations with 43 employees, would result in a complete bust.  Before their Account Manager at GoodAccountants.com could establish the appointment, the business owner would find an accountant on his own and then refuse to meet with their firm.

It would be almost two months later, before Jeff would receive a telephone call from Senior Business Consultant, Al Chisolm, regarding a local grocer that was looking for a bi-lingual, outsourced comptroller to replace his accountant. After meeting with the business owner, Jeff would quickly land the engagement as the outsourced CFO of two retail grocery establishments with combined sales of $8 million and annualized billings of $42,000.

“Although it took more than a month and a half for another great lead to come along, Jeff never panicked when the first client did not work out because he understood he was not purchasing a specific client from us but in fact was signing up for a six-month advertising and marketing program,” says Al Chisolm. “Some accountants lose sight of the fact that sometimes the client that catches their attention and motivates them to join our network for whatever reason may not be among the ones they get,” explains Chisolm.

With another potential $15,000 to $20,000 dollars GoodAccountants.com yearly engagement with a Los Angeles based production company that scores musical compositions for TV sitcoms, Jeff Unalp is closing in on his firm’s first $75,000 in guaranteed billings from GoodAccountants.com’s Designated Service Provider (DSP) marketing program. “When the first referral fell through, GoodAccountants referred several smaller clients to us which we engaged for a few thousand dollars before we landed the larger client for $42,000 in yearly billings,” says Unalp. “We made a total of $45,000 on our first $5,000 investment with them so we decided to upgrade to their Designated Service Provider (DSP) marketing program which guarantees $75,000 in annualized billings for a cost of $25,000,” explains Unalp. “Rather than purchasing a practice where many of the clients may already be unhappy with the quality of service, in my opinion this is a far better way to grow your practice,” says Unalp.

Be the first to comment on "Jeff Unalp of UMBCPA LLC Closing In On $75,000 In Billing From GoodAccountants.com"