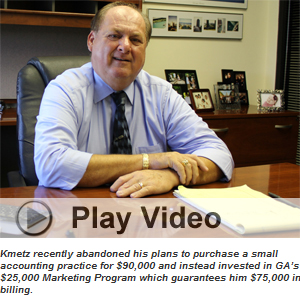 Jim Kmetz has been an accountant for the past forty years and maintains a small CPA accounting practice in Willowbrook, Illinois, a western suburb of Chicago.  Kmetz became a member of GoodAccountants.com in the fall of 2008 and has maintained his relationship with the company ever since.  Over the past three years says Kmetz, he has received numerous referrals from GoodAccountants.com of which many have turned into some of his best clients.  “The first referral they set me up with did not work out because of a personality clash between myself and the business owner which became evident during the interview that it wasn’t going to work out,” says Kmetz.  “But I stuck with GoodAccountants and over the past three years they have provided me with approximately thirty clients, all quality clients with nice sized businesses,” explains Kmetz.

Among the clients GoodAccountants.com has referred to Kmetz has been a dentist with annual billings of approximately $2,500 to $3,000.  Another is an owner of a Federal Express mailbox store also with recurring annual billings at between $2,500 and $3,000.  Another client referred to Kmetz by GoodAccountants is a long distance trucker and a fourth an insurance investigator both with recurring annualized billings at between $2,500 and $3,000.  “All the clients they have referred to me have been high quality small businesses along with about ten tax return clients,” adds Kmetz.

What Kmetz has to say about other accountants who do not believe in the value of the Internet as a source for obtaining quality clients is they are probably not serious about growing their practice.   The trends are clear for anyone who has been an accounting practitioner for any length of time says Kmetz, that fewer and fewer clients are coming from the phone book.  “Over the last few years I don’t believe I’ve gotten one referral through the phone book,” say Kmetz.  “Today, everybody is on the Internet,” he adds.