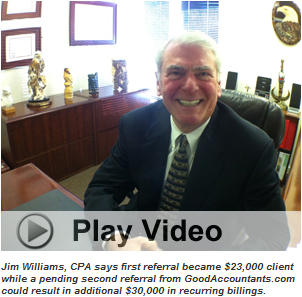 “They called me out of the blue and asked me to join their network and I did,” says Jim Williams, a certified public accountant based in San Jose, California.  Like a growing number of accountants across the country, Williams has decided to try his hand at Internet marketing as a way to attract new clients to his accounting practice by purchasing a membership with GoodAccountants.com.   Within days after the phone call from Senior Business Consultant, Kristin Palapoli, Williams engaged the international construction materials company that she arranged for him to meet with, for a total of $23,000 dollars in recurring annual billings.  It would become his first referral and very first client as a member of  GoodAccountants.com.

“Five or six years ago, a phone call placed to an accountant during the middle of the tax season from someone offering a business client paying $23,000 in billings would have been regarded as a prank call,” says Palapoli.  “Today, as a result of the radical changes the accounting industry has undergone, it is more routine for an accountant to receive a phone call from us than from a banker or lawyer that may also be a source of client referrals,” adds Palapoli.

As the nation’s largest accountancy referral service more than 10 million business owners have used GoodAccountants.com as a resource for finding local accountants.  The company specializes in Internet marketing that is targeted to business owners and individual taxpayers who require the services of an accounting professional for their business or personal needs.    “The power of social networking as a marketing tool can no longer be ignored in an era where governments are being toppled by the single most important force in our lives today which is the Internet,” says Johanna Laurent, President of GoodAccountants.com.  ” Just as Egyptian protesters harnessed the power of Twitter to help bring down Hosni Mubarak, many accountants are using the power of the Internet in a similar way to grow their business,” she adds.

Accounting services like most everything else is something that is now predominantly searched for through the Internet which is why accountants like Jim Williams are increasingly taking advantage of the turn-key Internet platform that is afforded to them by GoodAccountants.com, which can connect them directly to dozens of new clients.

Widespread internet connectivity along with the proliferation of smart phones and computer tablets has not only changed the way in which we obtain everything ranging from books, movies, food and clothing but it has also changed the way in which we seek out professional services.  A recent study conducted by BIA Kelsey, a Chantilly, Virginia based consulting firm reports that nearly all consumers (97%) now use online media to shop locally.   Rudder Finn, one of the world’s largest public relations firms, recently announced a new survey that reports Americans are spending an average of 2.7 hours per day on the mobile Internet – connecting socially, managing their personal finances, and even as a means for advocacy.  The report goes on to state the following:

“Mobile phones have become the way people organize their lives—managing finances, connecting with friends, purchasing products—and this trend will only accelerate,” said Kathy Bloomgarden, Ruder Finn co-CEO. “The mobile phone is becoming the most powerful online device, and the faster businesses can adapt their services to harness consumer mobile intent, the more rapidly they can capitalize on understanding their customers to drive growth.” 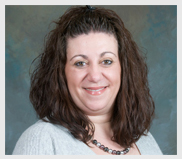 “Our system allows us to directly route clients, who search the Internet daily for accounting services, to thousands of accountants all over the country,” says Palapoli.  “It’s an awesome thing to see a company come onto our website and ten minutes later an accountant in our network is submitting feedback to us, through our internal messaging system, informing us they have scheduled an appointment to meet with the company,” explains Palapoli.  “Then to see that scheduled appointment turn into a $10,000 or $15,000 engagement kind of blows your mind,” she adds.

As a result of the colossal shift in the way goods and services are now acquired compared to the way they were ten years ago, advertisers today no longer limit their advertising campaigns to print, radio and television but more so are targeting social networking websites as a way to get their message heard by millions of potential new customers.  “When you think of the fact that brick and mortar businesses like Block Buster and Borders Book Stores are now in bankruptcy as a result of their Internet based competitors, Netflix and Amazon, it is abundantly clear that consumers have abandoned the old ways of consuming goods and services and are totally preoccupied with the Internet,” says Laurent.  “If you’re an accountant operating in this Internet Age and are relying on ‘word of mouth‘ to sustain your practice while your competition is utilizing highly sophisticated technology to attract new clients the reality is your practice will only shrink,” says Laurent.  “In fact they’re probably attracting your clients right now,” she quips.

Be the first to comment on "My First Client From GoodAccountants.com Is $23,000 Yearly Billing"