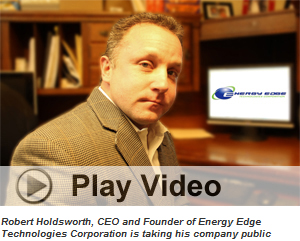 Energy Edge Technologies Corporation is an eight year old energy engineering company run by Robert Holdsworth who says he has always envisioned himself one day taking a company public.  Having held a series 7 general securities license with the National Association of Security Dealers (NASD) as well as numerous past managerial positions with prominent financial institutions together have provided Holdsworth a clear path to fulfilling his dream.  His entrepreneurial spirit combined with a penchant for spotting market trends have provided Holdsworth the impetus to start his own company.

Long before the words ‘green energy’ became a part of popular vernacular Holdsworth realized that unbridled levels of energy consumption by large corporations would one day force them to undergo radical change.   Today, Holdsworth shows companies how they can significantly cut their operating costs by reducing energy consumption through the deployment of as many as two dozen different engineering and technology solutions.  For example, when the folks at 3M saw how much money they could save through cutting energy consumption by almost 30 percent in just one of their plants they immediately hired Energy Edge as consultants.  The company has found its primary customer base among companies that have large energy consumption footprints.

Along with making green energy a valuable revenue stream of ‘green dollars’ for some of America’s largest corporations, Robert Holdsworth has also found his greatest ally within the U.S. Government.  As federal regulators turn their attention to enforcing clean energy legislation, a focal point of the Obama Administration, Energy Edge has also captured the attention of Wall Street.  “By this time next month we’ll have our trading symbol for the NASDAQ,” says Holdsworth.  Having already completed a private placement memorandum Energy Edge has taken the steps to join the ranks of our nation’s publicly traded companies.  Below is a transcript of an Interview that was recently conducted by GoodAccountants.com with Energy Edge Technologies’ founder and CEO, Robert Holdsworth:

Question:   How important is green energy technology to Americans?

Answer:      First and foremost it’s critical to the cost of doing business.  When we talk about green energy there are really two aspects to it; there is the green of the environment which it’s critically important that we leave the world better for our children than the way we’ve received it and then there is the green of the dollar especially in these hard economic times, anywhere that a company can reduce that bottom line cost they’re increasing their profits by the same amount, which is critical to businesses out there.

Question:    When did you first come into contact with GoodAccountants.com?

Answer:       As we were taking the company public we realized pretty early on that we really needed a new accounting firm that had the experience working with public companies and we looked online and found GoodAccountants.com.

Question:   What role has GoodAccountants.com played with your company?

Answer:      I love GoodAccountants.com because they did such a great job for us by first listening very closely to what our needs were.  They studied our industry as well as our business model and were able to bring to us the perfect accounting firm that fit our needs perfectly.

Question:   What do you think has made Energy Edge Technologies Corporation such a compelling story for Wall Street?

Answer:      Energy Edge does whole facility energy projects for our customers where we’re able to bring to bear several different, literally more than two dozen different engineering approaches and technologies to treat the various energy consuming loads across a facility.  Whether it be lighting loads, HVAC, refrigeration, production loads, water and gas systems and really the idea is to get moderate saves across those different  energy consuming loads but really have the aggregate of savings add up for our customers.  Typically we’re going to get anywhere from eight percent to as much as thirty percent or more in reduction of that bottom line utility bill for our customer and even better all those financials of the project; here’s what the customer is spending, here’s what we’re guaranteed to save, the project cost, the payback, the return on investment, the carbon foot print reduction, the financing terms so there’s no out-of-pocket expense for our customer, all those numbers, we guarantee them.  We guarantee them in writing but more than that we also back them up with an insurance policy and the insurance policy is underwritten by Lloyd’s of London.  Really the whole idea is to take the financial risk out of the buying decision for our customers.  We’re very conservative and we’ve never missed our numbers yet but if there were a shortfall, instead of saving let’s say $200,000 dollars for our customer we only saved $190,000 dollars for them, if that were to happen, that $10,000 dollars shortfall, that $10,000 dollars gap is literally made up with a check from the insurance company to our customer to make them whole.

Be the first to comment on "GoodAccountants.com Helps Company With IPO"