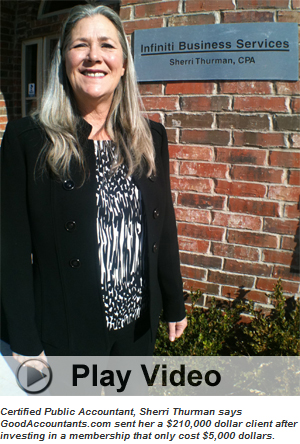 Sherri Thurman operates a small CPA firm located in Oklahoma City, a part of Middle America where uncharacteristic to the national average the unemployment rate remains a mere single digit at around six-percent.  “Although the rest of the country may be experiencing economic difficulty things aren’t too bad here,” says Thurman.  Sure some businesses have shut down and the affects of the national economy can still be felt in many ways, overall says Thurman she has a lot to be thankful for.  One of the things for which she’s extremely grateful is the telephone call she received one morning from Al Chisolm, a Senior Consultant with GoodAccountants.com.   This one phone call she projects will earn her more than $210,000 over the next 10 years, the minimal period she says she will retain the $8 million dollar, oilfield equipment company that she has engaged from GoodAccountants.com.  “This client has contracted to pay me between $20,000 and $25,000 dollars per year,” says Thurman.  The bottom line says Thurman is she will earn $210,000 dollars  from a $5,000 dollar investment in a GoodAccountants.com membership.  “I don’t know how Al got my name but I’m sure glad he called me,” she chuckles.

“If you think about it I’ll keep this company for ten years which is $210,000 worth of billing all for my $5,000 initial investment to GoodAccountants.com which is a pretty good return on investment,” says Thurman as she reflects on her new client.  Looking to grow her accounting practice by $200,000 in new annualized billings in just the next few years Thurman says she feels fortunate that she was contacted by GoodAccountants.com.   “I received a phone call one morning out of the blue from GoodAccountants and they told me they had a client that was about an hour from Oklahoma City for whom they were searching for an accountant and wanted to know if I would be interested in joining their national network,” explains Thurman.  After hanging up her telephone Thurman says she immediately went to her computer and conducted a Google search using the words “find an accountant” and was surprised when GoodAccountants.com’s website came up at the very top of the list.  A half hour later Thurman says she was back on the telephone signing up for a six-month membership with GoodAccountants, the nation’s largest accountancy referral service. The following week Thurman met with the owners of the $8 million dollar oilfield services company with 65 employees and immediately engaged them.  “I walked out of the meeting with their previous year’s tax return which needed to be corrected along with some other work I bought back from my very first meeting with them,” says Thurman.

“The difference with meeting a client referred by GoodAccountants.com is they are highly motivated to retain someone right away because they are actively looking and they’re unhappy with their current situation which is why they’ve contacted GoodAccountants in the first place,” explains Thurman.  “A few years back we decided we were going to try to increase our business and we hired a telemarketer and we hired a salesman and we bought some lists and we spent a lot of money over a year paying them and today we have nothing to show for it.” says Thurman.  “We didn’t get any good clients from it and basically we just spent a lot of money,” she adds.  “With GoodAccountants.com you already have a pretty captive market because  it’s people that are already looking for an accountant and you’re not calling people up trying to convince them to change from somebody they like or from somebody their currently using but instead these are people that are actively looking for an accountant,” says Thurman.

According to Thurman the accounting profession has undergone significant changes over the last several years which have made marketing an absolute necessity for accountants all across the country.  An industry that once relied on word-of-mouth almost exclusively as a source for new clients has now become one that is significantly dependent upon the Internet and GoodAccountants.com.