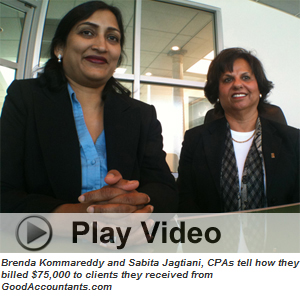 Something momentous is quietly unfolding in Chatsworth, California just as it is in cities all across America such as New York, Atlanta, Boston, Chicago, Dallas, Tampa and Charlotte just to name a few. It’s bringing about a new wave of thinking and a new way of doing business for hundreds of accountants like Sabita Jagtiani and Brenda Kommareddy of Jagtiani & Kommareddy, Certified Public Accountants. The pair who are often referred to as the ‘dynamic duo’ by staff members at GoodAccountants as a result of their winning personalities have racked up more than $75,000 in billings to clients referred to them by GoodAccountants.com, the nation’s largest accountancy referral service and have become the focus of this month’s Insider cover story.

“GoodAccountants.com came to our rescue,” says Sabita Jagtiani referring to the sustained growth her accounting firm has experienced over the past eighteen months despite the recession which has ravaged the accounting industry. “Many of our other clients have packed up and gone out of business but we actually increased our overall billings during this same period of time as a result of all the clients we’ve landed from GoodAccoutants.com,” she explains.

“We’ve gotten a variety of clients from them ranging from 1040’s to a $12 million dollar commercial landscaping company based in San Pedro, California with more than100 employees,” remarks Brenda Kommareddy. “We recently engaged a $6 million, 25 year old, food safety and nutrition company based in Westlake Village, California from GoodAccountants.com that has become a $25,000 dollar annual client of ours,” says Sabita Jagtiani. The company referred to by Jagtiani happens to be one of only two companies in the entire country that hold government contracts in their field and are consultants to major hotel chains and casinos, as well as to sports and entertainment complexes across the country. “Their bookkeeper of more than 20 years had retired so they contacted GoodAccountants.com for a replacement but were advised by Patty Schoenfeld of GoodAccountants that our firm could do the same work for them on an outsourced basis more cost effectively so they agreed to retain us,” explains Jagtiani. “The folks at GoodAccountants.com are for real and they have worked very hard to match us with the type of clients we look for,” adds Jagtiani.

Before upgrading to GoodAccountants.com’s $25,000 Marketing Program both Jagtiani and Kommareddy say they first learned of GoodAccountants from a radio commercial they heard while driving to work one morning but decided to get started with a smaller $5,000 dollar marketing program which they repeated two additional times. “When we first joined GoodAccountants we started to get worried because the first six months did not produce stellar results for us but then we suddenly began engaging much bigger clients from them,” says Kommareddy. “Marketing is something you have to commit to just as you commit to a particular profession; you don’t stop being a doctor because you may have lost your first patient,” she adds. “We’re so glad we kept renewing our membership because now we are seeing a two to three times return on our investment in the first year alone and the clients are staying with us year after year,” says Jagtiani. “So we recently decided to upgrade to their $25,000 marketing program which guarantees us $75,000 in billing,” she adds.

Among the clients that were referred to Jagtiani & Kommareddy is a 31 year old, 350 student, private Christian School located in Compton, California. “Al Chisolm at GoodAccountants set up the meeting for us to meet with them and they instantly fell in love with us and we with them,” says Jagtiani. “We also recently met with a medical doctor in Los Angeles that GoodAccountants referred to us which is still pending but looks very good,” she adds. When asked how she would at this point characterize the relationship between her firm and GoodAccountants.com her response was as follows; “To use the word ‘love’ is pretty strong however when somebody is giving you the kind of clients they’re giving us then I have to say I love them.”

To learn more about Jagtiani & Kommareddy, Certified Public Accountants please click here. To see the full reality television episode filmed on location in Chatsworth California featuring this firm and the clients referred to them by GoodAccountants.com please click here.