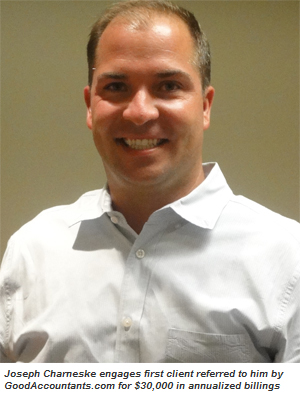 “Spending $5,000 dollars for the opportunity to meet with a potential client is not as fool hearted as it might sound,” says Joseph Charneske, a partner in a full service accounting firm based in Bannockburn, Illinois.   When asked how his partners felt about such a proposition Charneske admits they were somewhat skeptical at first however after some reassuring from him were willing to move forward.

“I basically received a phone call about a $7 million dollar medical equipment and supply company that was looking for a new accounting firm to outsource all of their accounting work to,” says Charneske, a partner at Goldberg Mechales Charneske & Schiffman, Ltd.   “We’re accustomed to receiving client referrals from other clients of ours who are happy with our work and not from a marketing firm,” says Charneske. However his awareness of GoodAccountants.com which spans a period of more than 18 months combined with the appeal of the fast growing medical equipment company presented to him by Senior Consultant, Al Chisolm was far too compelling for Charneske not to follow his intuition to invest the $5,000 dollars required to become a member of GoodAccountants.com.   The decision to do so has paid off handsomely in the form of a six-hundred percent (600%) return on investment achieved in little more than sixty days.

“I now have a contractual $30,000 dollar yearly billing engagement with a great client referred to me by GoodAccountants.com and believe it or not I just sent them another $5,000 dollars today,” says Charneske.

When asked by GA Insider if his partners were now ready to upgrade to a larger marketing program Charneske replied they would have been pretty disappointed had we not landed the client.  Charneske himself maintains however he is very comfortable with GoodAccountants.com considering the extensive research he has done on the company and having witnessed how far GoodAccountants has come over the years.

The fact is Joseph Charneske is a Certified Public Accountant and with all things being equal he certainly does understand what a good return on investment should look like.   A six times return on one’s money is not exactly chop liver especially when stacked up against the single digit rates of return that are being offered today by most other investments. “This is a great way to build an accounting practice and I also get to write off the $5,000 dollar membership fee as a marketing expense,” adds Charneske.