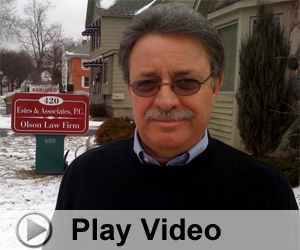 An important part of mastering the client acquisition process comes with the understanding that success or failure cannot be defined by a single client.  At least that’s how Bill Estes, a Certified Public Accountant and sole practitioner based in Rochester, Michigan now sees it when it comes to engaging large clients who pay fees of $25,000 or more.

“When you set your sights on acquiring commercial clients who pay substantial fees you should also be prepared at some point to experience somewhat of an emotional roller coaster ride,” says Estes.  Recounting his own experience with the very first referral he received after joining  GoodAccountants.com, a potential six-figure engagement with a medical group that would ultimately decide to select another accounting firm, Bill Estes now says he regrets the lack of faith he displayed in the overall process.  “I was beside myself with anxiety when I first learned the owner of the medical group  had decided to move in a different direction,” says Estes.   “My only regret is the way I initially acted with some of the staff at GoodAccountants after I found out I was not going to be retained by the client they referred.  I know better now not to allow myself to be defined by any one client,” says Estes.

“I had never done any kind of marketing program before in my 30 years being a CPA other than taking out ads in the local yellow pages here in Rochester, Michigan,” says Estes.  Although he admits being able to count on both hands the number of clients he has managed to convert  over the years from his yellow page ads, he remained even more pessimistic about clients who search the internet to find their accountant.

During the tax season Estes estimates he does about 400 individual tax returns whereas  the rest of the year he focuses on servicing physician groups as an outsourced CFO.    With all of the clients resulting from his ads in the yellow pages pretty much being small clients wanting tax returns done when presented by GoodAccountants.com with the opportunity to meet with the owner of a large medical practice  paying between $75,000 and $100,000 annually, although reluctant, Estes decided to take the plunge and became a member of the nation’s largest accountancy referral service.

“To think that here I was investing in a marketing program at a time when the health of the economy was worst than awful, especially in a city like Detroit already hard hit by massive unemployment, made it an even more difficult experience,” says Estes.  “I guess the specter of what I saw as potentially losing all of my money if I didn’t get another referral from GoodAccountants.com was more than I could handle at the time,” he adds.

Instead of thinking from the perspective that difficult economic times bring about the shifting of business alliances as companies look for more favorable pricing for the goods and services they must purchase, many accountants are missing out on the huge marketing opportunity that presently exists in the marketplace.

“Marketing is a process and accountants like everyone else who market their services must be patient and allow the marketing process to work,” says Johanna Laurent, Chief Executive Officer of GoodAccountants.com.   Also losing sight of the fact that bigger clients are generally more difficult to engage than smaller ones can often lead to a level of frustration that can drive even the most savvy of marketing professionals crazy.  “Bigger clients are generally more complex as well as more discerning when it comes to selecting their accountant and will likely want to compare the services of several accounting firms before making a decision,” says Patty Schoenfeld, a Senior Business Consultant with GoodAccountants.com.  “As professionals we are forced to live with this reality but it should never shake our resolve when it comes to landing new clients,” she adds.

In an effort to help demystify GoodAccountants.com’s marketing and referral process the current episode of GA Access is dedicated to documenting what really transpired with Bill Estes and the client that was the first referred to him by GoodAccountants.

“I don’t think two full weeks rolled around before they had me back out in front of another fantastic client,” says the mercurial accountant.  The second referral was an $11 million U.S. subsidiary corporation of a $1.2 billion, Sweden based, publicly traded company with more than 700 employees.  My first reaction to Patty Schoenfeld’s phone call was “why me?”  “Why would a multi-billion dollar corporation using a ‘Big Four’ accounting firm want to meet with little old me,” says Estes.   The fact is many large corporations are turning to small accounting firms to handle their accounting and financial requirements  whereas in the past the reverse may have been true.  “Companies today are more concerned with their bottom line and if they can save money on accounting costs by switching from a large firm to a competent, smaller, less expensive firm they will,” says Laurent.   “Many large corporations, universities and retail establishments come to us and ask if we can find a smaller accounting firm for them that will be more attentive as well as less expensive especially as a result of the downturn in the economy,” explains Laurent.

“When I first called Bill to tell him I was lining him up to meet with another great client he was very sarcastic with me,” says Schoenfeld.  “He was still stuck on the client that got away and it was preventing him from moving forward,” she adds.   “I almost hung up on him because I thought at that point he was acting somewhat childish,” she further explains.   Somehow the two managed to set their mutual cynicism aside and Schoenfeld scheduled Bill for a meet and greet with the Vice President of Finance of the subsidiary company.

At this point we would love to report that Estes retained the second very large client that was referred to him by GoodAccountants.com and everyone lived happily ever after which is exactly what happened.  Notwithstanding, it would take another two weeks after the fact according to Schoenfeld for Estes to realize he had actually landed the client.  “When I called the V.P. of Finance she informed me of her personal attempts to contact Bill after their meeting having resulted with no response,” says Schoenfeld.   “Had I not followed up when I did and discovered she was having a difficult time getting hold of Bill and was preparing to scratch him off her short list there is a good possiblity we would have lost this one too,” she adds.

“The moral of the story is stay focused on the goal at hand and don’t become distracted by external forces that can sometimes play games with your mind and interfere with your overall marketing strategy,” says Patty. “Accountants have to begin to understand that marketing is a process and not a question of pulling a rabbit out of a hat.  There’s nothing magical about it, it’s a process and they have to be willing to allow the process to work,” explains Schoenfeld.   “I’m just so glad I didn’t allow Bill’s lack of confidence to interfere with me staying on top of the engagement for him and although he may have given up on me, I never gave up on him,” says Schoenfeld.

To watch the full reality television episode filmed on location at Bill Estes and Associates, P.C. and hear Bill  recount his personal experiences as a GoodAccountant you must become a free subscriber to GA Access.

Be the first to comment on "Bill Estes Engages $11 Million U.S. Subsidiary Company Referred by GoodAccountants.com"