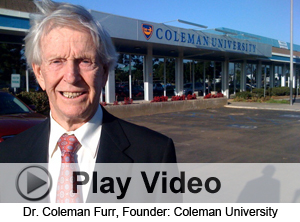 Founded in 1963, with one teacher and fourteen students housed in a small building in downtown San Diego, California, Coleman University now sits on 5.5 acres of some of the most expensive real estate in San Diego, County. For more than 45 years the 84 year old educator, Coleman Furr has been on a spiritual quest to establish what most educators have long regarded as being the impossible; a university with a near 100% job placement rate for almost every one of its graduates. The truculent benefactor stands vindicated in his belief that he could establish an institution of higher learning that places 94% of its graduates into a good paying job. “By teaching them what employers want them to be taught, Coleman University gives its students the training they need to get a job and go to work,” says Dr. Coleman Furr, the University’s founder.

Despite the dramatic downturn in our nation’s economy and the current ten percent unemployment rate, 94% of all Coleman University graduates are employed in a gainful job on or before their graduation date. Using what he describes as an “inverted curriculum” Dr. Coleman Furr may have discovered what could very well be the cure to the current economic malaise that has tens of millions of Americans unemployed.

Motivated by his desire to turn around what he saw as a national crisis with jobs leaving our shores each year in record numbers Dr. Coleman Furr set out to do something about it and along the way may have found the key that opens the door to what is truly a meaningful education; which seems to have eluded most Universities that remain all but oblivious to it. As more and more college graduates lose the battle to payoff their six-figure education loans and are joining the ranks of the unemployed perhaps other universities will begin to consider adopting Coleman University’s ‘inverted curriculum.’

With a realization that creating new jobs is directly hinged to our ability to create a more relevant worker, Dr. Furr’s approach to workforce preparedness starts to make more and more sense. But if  by chance Dr. Furr proves not to have cornered the market with the answer to the single most important domestic problem facing Americans today; which is massive unemployment, then the country is going to be hard pressed to find a more viable solution than the one that bears Dr. Furr’s name and has been transformed into brick and mortar as Coleman University.

The way we educate our work force will directly affect our nation’s bottom line according to Dr. Furr is a truth that speaks to what is fundamentally wrong with our economy. “If we are going to teach people how to get a job we ought to also help them find a job,” he adds.

Formerly known as Coleman College the school which grossed $100,000 in its first year while housed in a small 15,000 square feet building in downtown San Diego has since grown into 87,000 of combined square footage in two campuses on 5.5 acres; one in San Diego and the other in San Marcos. The school has three major educational departments; computer programming, computer networks and computer graphic design.

The full reality television episode featuring Debbie Ford, Manager of Affiliate Marketing with GoodAccountants.com was shot on location at the Balboa Avenue Campus and can be seen by clicking here: see full reality TV episode.

Be the first to comment on "The Story of Coleman University and its founder Dr. Coleman Furr"