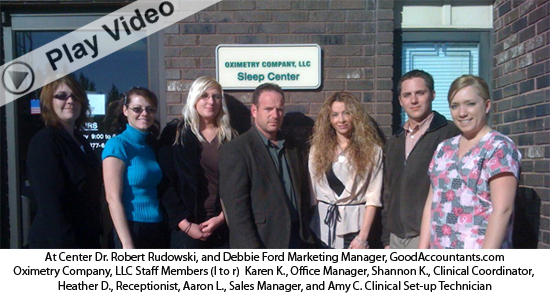 Dr. Robert Rudowski, by almost everyone’s definition of the word is an extremely successful healthcare provider and businessman. Based in Clinton Township, Michigan, Dr. Rudowski operates a chain of sleep diagnostic clinics and is a respected authority on sleep and its related disorders which adversely affect more than 70 million Americans. Like many healthcare professionals who run highly complex medical operations Dr. Rudowski must rely heavily on his accountant especially with reimbursements being routinely reduced along with all the changes on the horizon for the healthcare industry. Using the same accountant for more than four years, Dr. Rudowski was resistant to the idea of getting a second opinion as he often advises others to do when confronted with a serious medical condition.

Given the raging healthcare debate in Washington along with Detroit’s difficult economic climate Dr. Rudowski felt compelled to request monthly reporting from his accountant that would keep him abreast of his financial position as well as the performance of his clinics. When the doctor called his accountant to inquire about why he had not received a single profit and loss statement in more than six months he found himself embroiled in a hotly contested debate. It was during the phone call that Dr. Rudowski realized it was time to bring a fresh set of eyes to his internal accounting process so he contacted GoodAccountants.com. “Without the reporting that I need I couldn’t credibly manage my business. So I started looking on the internet and I came across GoodAccountants.com,” says Rudowski. As a result of retaining the services of GoodAccountants.com Dr. Rudowski discovered he was paying substantially more than he needed to pay for his accounting process. “I had no idea that for years I was being severely overcharged and not getting what I should be getting,” he states.

GoodAccountants.com recommended the accounting firm of Sepesi Holdan & Associates to Dr. Rudowski which he immediately engaged at a savings of more than $48,000 per year or $4,000 per month. “What GoodAccountants.com has done for me is reduced my $75,000 to $100,000 a year in accounting costs to a far more manageable figure. That’s huge, especially when you’re an independent business person like I am,” states Rudowski.

GoodAccountants.com is the nation’s largest accountancy referral service having more than 10 million business owners use its highly popular website in their pursuit to find the right local accountant that can service their business and or personal accounting needs. “We specialize in helping businesses of all sizes from start-ups to publicly traded companies find the right accounting relationship that can expertly service them,” says Debbie Ford, GoodAccountants.com’s Manager of Affiliate Marketing. “It was during my conversations with Dr. Rudowski over the telephone that I realized how important his practice is to thousands of patients across the country,” she adds. “After speaking with Dr. Rudowski it became apparent to me that I needed to be tested so I personally booked an appointment with him and travelled to his clinic in Michigan,” explains Ford. (see full reality TV episode chronicling Ford’s travels to Dr. Rudowski’s Clinton Township, Michigan clinic).

According to the Center for Disease Control and Prevention (CDC) between 50 and 70 million Americans suffer from sleep disorders and are eight hundred percent more susceptible to heart attack and more than four hundred percent prone to becoming a stroke victim. People who are sleep deprived are more susceptible to a whole host of diseases including contracting the H1N1 virus or Swine Flu. Sleep disorder conditions such as sleep apnea can often lead to death and can seriously exacerbate preexisting illnesses such as hypertension and diabetes. Dr. Rudowski recommends taking the Epworth Sleepiness Test for anyone who often falls asleep during lectures or meetings, at stop lights or when watching a movie just to mention a few such instances. The Epworth Sleepiness Test can be readily found on the Internet or by contacting your primary care physician. A score of eight or more may indicate a need to visit a sleep disorder clinic for more thorough testing.

For more information about Dr. Robert Rudowski and his Oximetry Company, LLC please call (586) 489-1193 or go to Night Hawk Sleep Systems. Also watch our upcoming reality TV episode featuring our very own Debbie Ford who traveled to Michigan to meet with Dr. Rudowski and his staff.