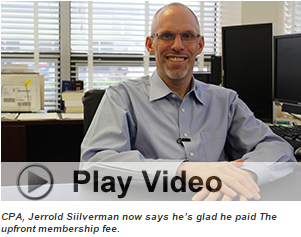 “Why do I have to become a member of GoodAccountants.com and pay an upfront membership fee before you send me out to meet with one of your clients,” asked Certified Public Accountant, Jerrold Silverman, during a telephone conversation with Stephen Mack, a Senior Business Consultant with GoodAccountants.com.

Silverman was not trying to give anyone a hard time when he said he was unwilling to pay an upfront $5,000 membership fee to join GoodAccountants.com and within days meet with one of GoodAccountants’s clients that was looking to sign a multi-year audit engagement worth as much as $50,000 in audit fees to his firm.

According to Silverman, the mathematics of the deal made sense; spending $5,000 to gain a potential $50,000 audit client in an industry where accountants normally pay dollar for dollar when purchasing clients or buying a practice from another accountant. The problem for Silverman was having to pay the $5,000 membership fee upfront, without knowing if whether or not he would actually convert any of the businesses that would be referred to him. “They did offer me a guarantee of sorts which said in the event that I didn’t engage the audit client, they would continue referring business to me until such time that I actually converted $5,000 in billings,” says Silverman.

“I explained to Jerrold, that as the nation’s largest accountancy referral service, the companies from all over the country that come to GoodAccountants.com for a referral to a local accountant, are relying on us to stand behind the accountant we refer to them, including any future problems that may occur,” says Mack. “They’re relying on our vetting process as well as our assurance to them that we will remain a part of the process should something go wrong, down the road,” he adds. Although Mack’s explanation made sense, it offered little comfort to the accountant who would still have to take a leap of faith if he wanted to meet with the 25-year old, non-profit organization that was seeking to change its auditor of the last ten years. Fortunately for Silverman, he took that leap of faith by joining GoodAccountants.com on January 9th. He has since engaged three new clients, one of which is a 30-year old, $1.3 million, dental practice with eight employees which pays him more than $10,000 per year.

Silverman has also upgraded his membership level with GoodAccountants.com to that of a Designated Service Provider (DSP) which gives him an automatic two-for-one billings guarantee. “For every dollar I spend with GoodAccountants.com in marketing fees they guarantee me two dollars in first year’s billings on the companies I engage from their referrals,” explains Silverman.

In essence, Silverman pays fifty cents to GoodAccountants.com on every dollar in first year’s billings he converts from the clients he’s referred by them. One-hundred percent of all subsequent year’s billings are kept by Silverman without any additional fees to GoodAccountants.com. As a Designated Service Provider, a $25,000 membership level automatically guarantees a return of $50,000 in first year’s client billings.

Consistent with the company’s business model of matching business owners with local accountants who are members of its nationwide network, to participate, accountants must first become members of GoodAccountants.com after a vetting process along with the payment of their membership fee before they can begin receiving referrals.