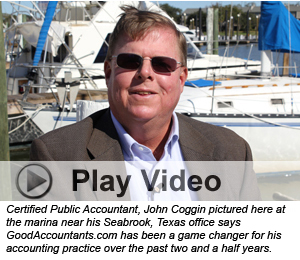 Coggin says he doesn’t believe he would have realized the same amount of billings over the same period of time had he relied solely on traditional ways to grow his practice such as through word of mouth.  “It’s difficult to depend on word of mouth to get referrals from existing clients,” says Coggin.

“I actually came in contact with GoodAccountants.com through a telephone call I placed to them after looking on the Internet to hire some people to help me with my firm,” says Coggin.  “While I was looking online I saw one of their advertisements and simply decided to give them a call and I’ve been with them ever since,” he adds.

As more and more accountants are turning to marketing as a way to grow their client base instead of purchasing existing practices from other accountants, GoodAccountants.com has emerged as the leading accountants’ marketing service in the country.  “Our growth is directly related to a realization by accountants that purchasing an existing practice can cost as much as three times the gross billing which can depreciate by more than fifty percent once the practice has changed hands,” says Johanna Laurent, President of GoodAccountants.com.  “Why pay three times the value for something that will only decrease in value once you own it, it’s just not good business sense,” adds Laurent.

Be the first to comment on "John Coggin Says GoodAccountants.com Has Been A Game Changer For His Accounting Practice"