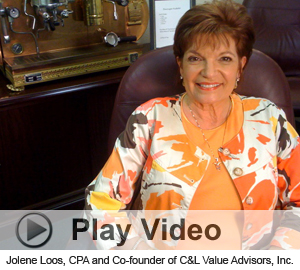 “I believe that accountants who refuse to market their practice are ultimately going to end up either having to sell their practice or merge with another firm or as they get ready to retire they’re going to fade away,” says Jolene Loos a Certified Public Accountant and member of GoodAccountants.com since April 2007. One of the co-founders of C & L Value Advisors, Inc., an eighteen person full service accounting firm based in Tampa, Florida, Jolene has added an additional $100,000 to her annual billings exclusively from companies referred to her by GoodAccountants.com.

Loos says her firm has not felt the affects of the downturn in the economy because she believes in marketing which has paid dividends in the form of substantial clients with well established businesses that can help a small accounting firm stay solvent even during the worst of times.  While others are shutting their doors Jolene’s firm has actually experienced substantial growth.   Among the clients she has obtained from GoodAccountants.com is Fairfax Imaging, Inc., a $15 million, world leader in turn-key image-based products and solutions for the data capture, forms processing, document imaging, and check/remittance processing industries.

“I have been actively looking for some practices to purchase and a lot of the companies I’m getting are practices that say they just can’t get new clients anymore or they’re losing a lot of clients,” says Loos. Although she admits that the economy has had a lot to do with scores of accountants shutting their doors or selling their practice she and her partner Kevin A. Cameron who holds an MBA degree in addition to his certification have never had a problem sustaining their firm’s growth since joining GoodAccountants.com.      “But I think people have got to realize that they’ve got to move into the 21st century, they’ve got to be involved on the internet. They’ve got to be doing things that are the way young people and young entrepreneurs deal with their own businesses and if they don’t they’re going to die a natural death,” adds Loos.

Loos admits that she would have never landed Fairfax Imaging, Inc., as one of her clients, despite the fact that the company had relocated their headquarters to a facility within walking distance to her Tampa offices, had she not spent the $5,000 membership fee to enroll her firm as a member of GoodAccountants.com.  “I didn’t even know that this company existed until I got the phone call from GoodAccountants.com telling me that a $15 million dollar business had just relocated to my neighborhood and was looking for a new accountant,” adds Loos.   This one client represents a better than ten times return on investment for C&L Value Advisors, Inc., which beats by far the R.O.I. the firm has realized on any single accounting practice they have purchased to date.  “Not only did I land such an awesome client in Fairfax Imaging but the owners of the company referred me to their spouses who also operate their own businesses,” says Jolene.  “I am involved on almost every level of investment the company and the owners make and they are a joy to work with,” she stated as she ended her interview with one final statement.    “I love GoodAccountants.com!” 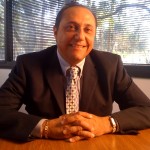 Although it’s been a long ways from Bethpage, New York for Steve Chahal and Tony Cristofano where the two young engineers once worked for Grumman Data Systems until it was acquired by Northrop in 1994, it has been a road worth travelling. The pair relocated to Fairfax, Virginia taking the town’s name for the company they started back then that has now grown into a $15 million dollar enterprise with 60 employees in the U.S. and another 40 in Vietnam. Established in 1994 with offices in Alabama, Arizona, California, Illinois, Maryland, New Jersey, Ohio, Tennessee, Texas, Virginia and Florida, Fairfax Imaging, Inc., provides state-of-the-art products and services to the document, forms and payment processing industries and includes among its client base the Internal Revenue Service, The California State Department of Motor Vehicles, the United States military along with a market share of more than 90% of the pharmaceutical industry. The company has garnered numerous leadership awards and recognition from every industry sector imaginable. So it wasn’t surprising to the folks at GoodAccountants.com when Fairfax Imaging’s President, Steve Chahal selected Jolene Loos and her company C&L Value Advisors, Inc., as the accounting firm that would lead them into the next decade of their development.

“We are very satisfied overall with the results that we got from GoodAccountants.com in finding us Jolene Loos and C&L Value Advisors, Inc.,” – Steve Chahal, President of Fairfax Imaging, Inc.

“If you know anything about Jolene Loos and her organization, the level of dedication she brings to her clients as well as her knowledge of business then you would know why they selected her, says Patty Schoenfeld, Senior Business Consultant with GoodAccountants.com.

Be the first to comment on "Jolene Loos, CPA Says Accounting Firms That Refuse To Market Will Die A Natural Death"